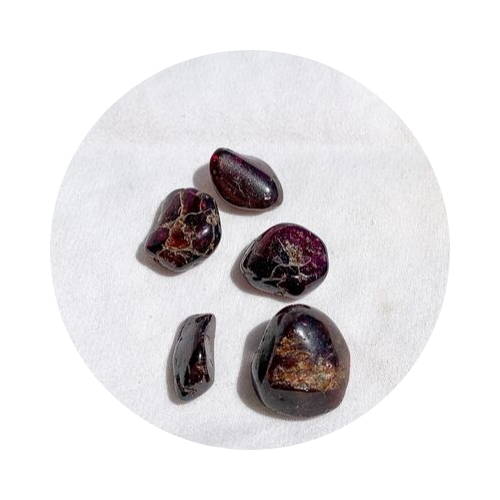 Garnet lore dates all the way back to biblical times, and was believed to have lit and guided Noah’s ark. The guiding force is strong with this one, and fiery Garnet is still thought to encourage success, romance, loyalty and emotional balance. * Note to the producers of The Bachelor – red crystal champagne flutes are not a workable stand in for the powers of Garnet.

As a root chakra stone, Garnet is said to be excellent for manifestation. Especially in relationships, creative projects and business pursuits. Got a comfortable job, but dream of a true calling? Or have a steady bae, but seek a soul mate? Set your intention with Garnet and find your life purpose.

Garnet’s power to release bad karma helps overcome crisis and trauma and assists in diminishing and eliminating abandonment issues. Use Garnet to release old ideas and conscious or unconscious self-sabotage and allow yourself to see the world as it is – full of promise, good friends, good times and plenty of bad reality TV.